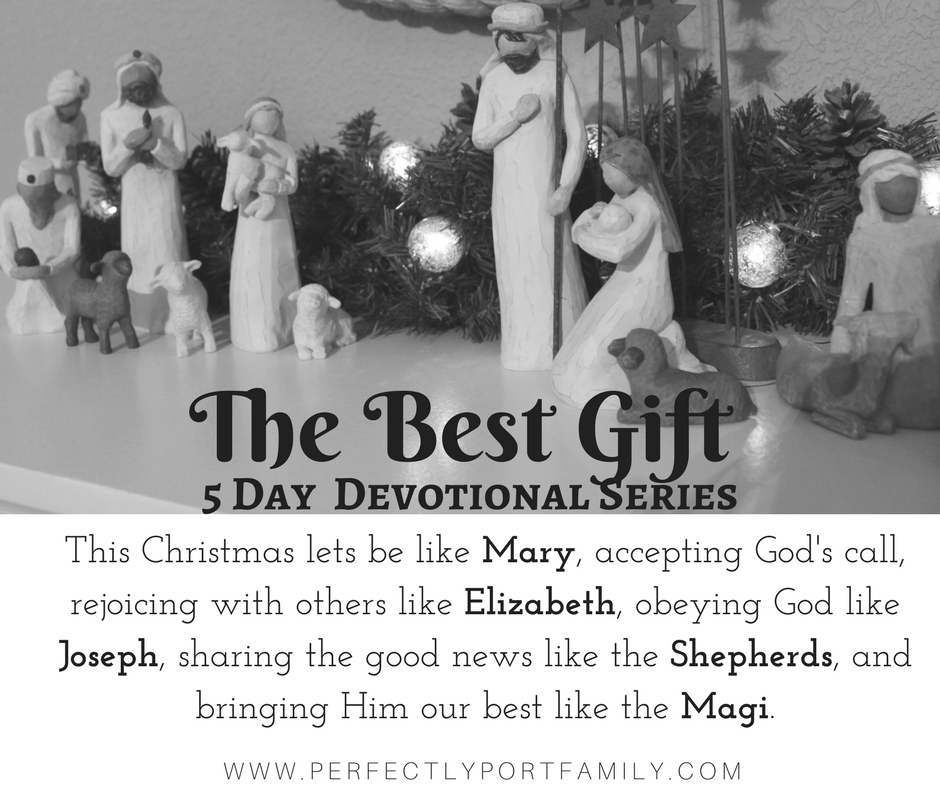 Over the next 5 days we will meet individuals who were blessed to play a role in the coming of our Lord Jesus as a baby into this world.  Join me everyday for a devotion as we prepare our hearts for Christmas and the best gift of all - Jesus.

What kind of gift recipient are you?  Grateful.  Joyful. Apathetic.  Envious of others gifts.

26 In the sixth month of Elizabeth’s pregnancy, God sent the angel Gabriel to Nazareth, a town in Galilee, 27 to a virgin pledged to be married to a man named Joseph, a descendant of David. The virgin’s name was Mary. 28 The angel went to her and said, “Greetings, you who are highly favored! The Lord is with you.”
29 Mary was greatly troubled at his words and wondered what kind of greeting this might be. 30 But the angel said to her, “Do not be afraid, Mary; you have found favor with God. 31 You will conceive and give birth to a son, and you are to call him Jesus. 32 He will be great and will be called the Son of the Most High. The Lord God will give him the throne of his father David, 33 and he will reign over Jacob’s descendants forever; his kingdom will never end.”
34 “How will this be,” Mary asked the angel, “since I am a virgin?”
35 The angel answered, “The Holy Spirit will come on you, and the power of the Most High will overshadow you. So the holy one to be born will be called[a] the Son of God. 36 Even Elizabeth your relative is going to have a child in her old age, and she who was said to be unable to conceive is in her sixth month. 37 For no word from God will ever fail.”
38 “I am the Lord’s servant,” Mary answered. “May your word to me be fulfilled.” Then the angel left her.

Let’s focus in on the final verse, verse 38.  I am the Lord’s servant, Mary Answered, May your words to me be fulfilled.

Mary, although terrified and in awe of the angel visitor, responded with willing acceptance to the gift of the Lord.

Much was at stake for Mary.  Being betrothed and pregnant before marriage was not only socially unacceptable, she could be stoned to death. If Joseph chose to divorce her quietly she still would be left to peddling or prostitution as her source of income not to mention the life-long social chastisement.  Yet, she responded with willing acceptance without questioning what the future held.

Have we willingly accepted Jesus as gift like Mary did? If you have, has God called you to something?  Have you accepted that call in trust?

Right before Mary accepts the call, the Lord's angel assures her that the Lord is faithful in verse 37.  For no word from God will ever fail.  So often we don't fully trust God at His word thus missing the opportunity to serve Him.

Not only does Mary answer the Lord's call in acceptance and trust, she goes on to praise him in song in Mary's Magnificat in Luke 1:46-55.

And Mary said:
“My soul glorifies the Lord47     and my spirit rejoices in God my Savior,48 for he has been mindful    of the humble state of his servant.From now on all generations will call me blessed,49     for the Mighty One has done great things for me—    holy is his name.50 His mercy extends to those who fear him,    from generation to generation.51 He has performed mighty deeds with his arm;    he has scattered those who are proud in their inmost thoughts.52 He has brought down rulers from their thrones    but has lifted up the humble.53 He has filled the hungry with good things    but has sent the rich away empty.54 He has helped his servant Israel,    remembering to be merciful55 to Abraham and his descendants forever,

Let's be like Mary this Christmas willingly accepting the Lord's call on our lives and giving Him all our praise.

Until next time, keep on keeping on with an intentional, joyful, faith-filled life.  #tribekoko